The Ningaloo Coast is a World Heritage Site located in the north west coastal region of Western Australia. The 705,015-hectare (1,742,130-acre) heritage-listed area is located approximately 1,200 kilometres (750 mi) north of Perth, along the East Indian Ocean. The distinctive Ningaloo Reef that fringes the Ningaloo Coast is 260 kilometres (160 mi) long and is Australia’s largest fringing coral reef and the only large reef positioned very close to a landmass.

The coast and reef draw their name from the Australian Aboriginal Wajarri language word ningaloo meaning “promontory”, “deepwater”, or “high land jutting into the sea”. The Yamatji peoples of the Baiyungu and Yinigudura clans have inhabited the area for over 30,000 years.

Most famed for its whale sharks which feed there during March to June, the reef is also rich in coral and other marine life. During the winter months, the reef is part of the migratory routes for dolphins, dugongs, manta rays and humpback whales.The beaches of the reef are an important breeding ground of the loggerhead, green and hawksbill turtles. They also depend on the reef for nesting and food. The Ningaloo supports an abundance of fish (500 species), corals (300 species), molluscs (600 species) and many other marine invertebrates.

The reef is less than half a kilometre offshore in some areas, such as Coral Bay. In 2006, researchers from the Australian Institute of Marine Science discovered gardens of sponges in the marine park’s deeper waters that are thought to be species completely new to science. The short-nosed sea snake, thought to have been extinct for 17 years, was found on Ningaloo Reef in December 2015. 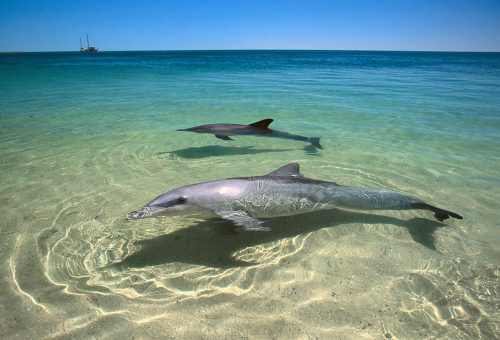